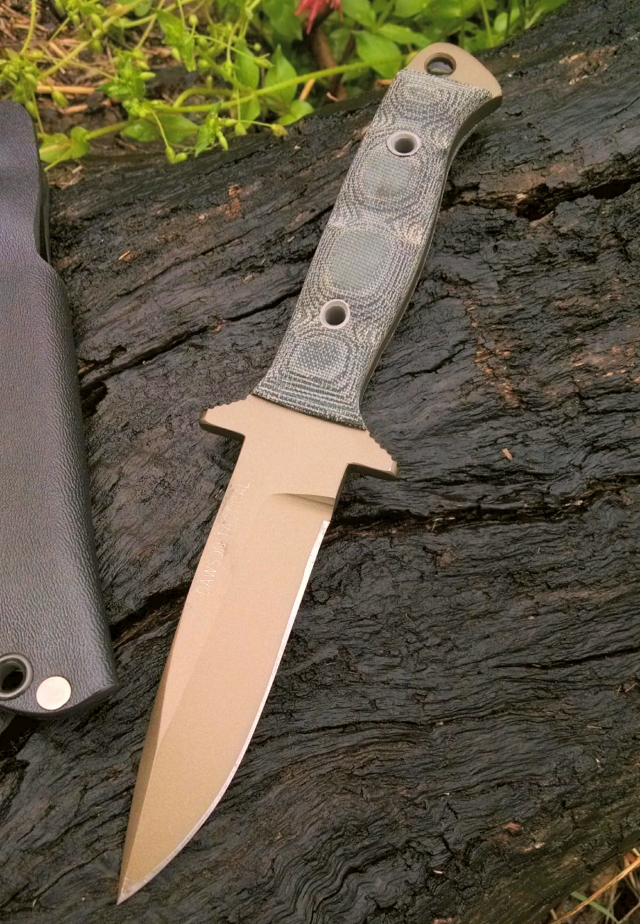 When I got this at the gun show, I wasn’t sure of the model name. I looked it up and found the Timber Wolf. 4.25″ blade, 3/16″ thick and made from 52100. Before I began using it, I measured everything to verify specs, it was all wrong. I went back to dawsonknives.com and after looking closer I discovered I actually had the “Victory” model.

So, the proper specifications are, 4″ blade, 1/4″ thick 5160 steel with and OAL of 9″. Micarta handles. The blade finish is burnt bronze Cerakote. Makers mark for this knife is Dawson Tactical. Some of their knives are marked G3 to indicate the 3 generations of the Dawson family that make knives.

So, you have to wonder how such a compact knife performs, especially since it is 1/4″ thick which is something you might expect to see on a much larger knife. Smaller knives tend to be a little thinner to cut/slice better.

The sheath is Kydex and comes with a couple of attachments. I just use paracord to allow me to wear the knife between the belt and waistband of my jeans. Convenient and conceals easily. 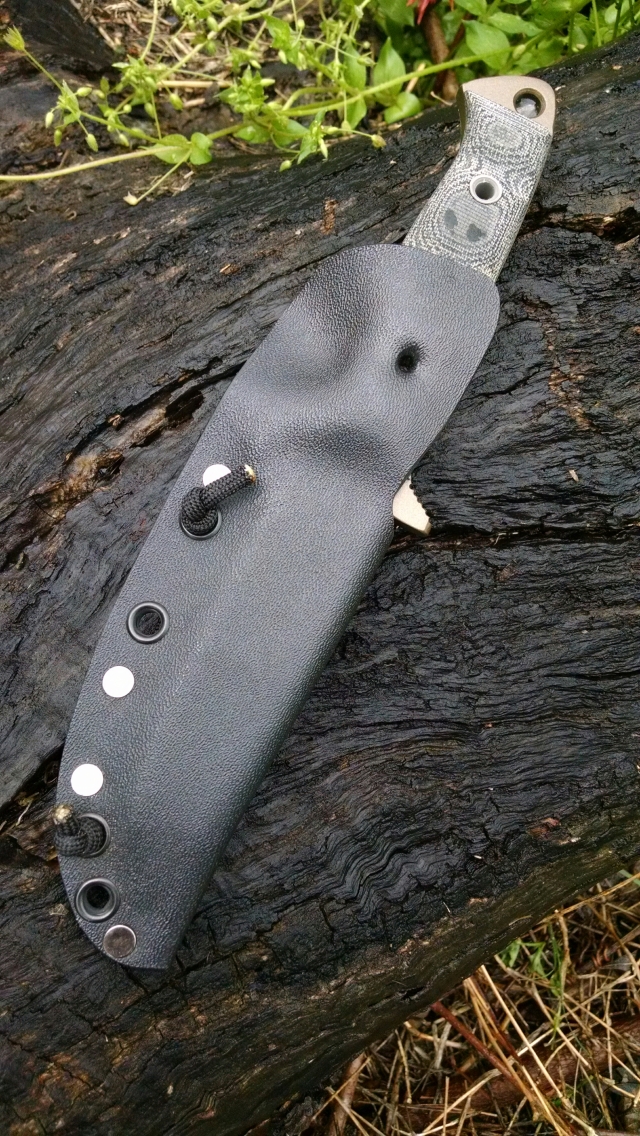 You see the recessed hole in the sheath around the handle of the knife? It matches with a rivet in the handle which locks the knife in the sheath. When drawing, you simply use you finger or thumb to push it out a bit. With a bit of practice, it becomes a fluid, single move.

Using the knife some over the last week has been fun. Cutting a little cardboard, feathering a few sticks and cutting up a chicken breast and a potato. Nothing major, just a few common things to see how it compares to other knives I have.

It comes with a good edge that was hair scraping sharp, a few swipes on a steel had it hair popping sharp. It cuts well, as you might expect, being fairly small and very thick, it’s not quite the slicer that a 1/8″ ffg blade might be, it gets the job done though. Feathering sticks is easy and no hot spots on the handle to hurt your hands.

You can see that there are integral guards to keep your hand from sliding up on the blade. The pommel is extended and can be used for impact.

The edge held up very well as did the finish which has just a couple of very minor dings in it. I must say though that it has not seen extended heavy use but I am looking forward to really putting it through its paces.

Overall this is a really nice knife from a maker (now family of makers) that’s been doing this for something like 40 years.

A thinner knife might slice and cut better but you lose something in durability of you find yourself having to really push your knife in an emergency/survival situation.

The “Victory” is a compact knife that can slice and cut fairly well but I suspect would really be a comfort if you found yourself in a situation where you might have to do things with your knife that would be considered abuse. My guess is that this knife is about as indestructible as a knife can be.

I intend to use this a lot more over the coming months and will update this review at a later time.

Overall I think it is quite a nice knife. 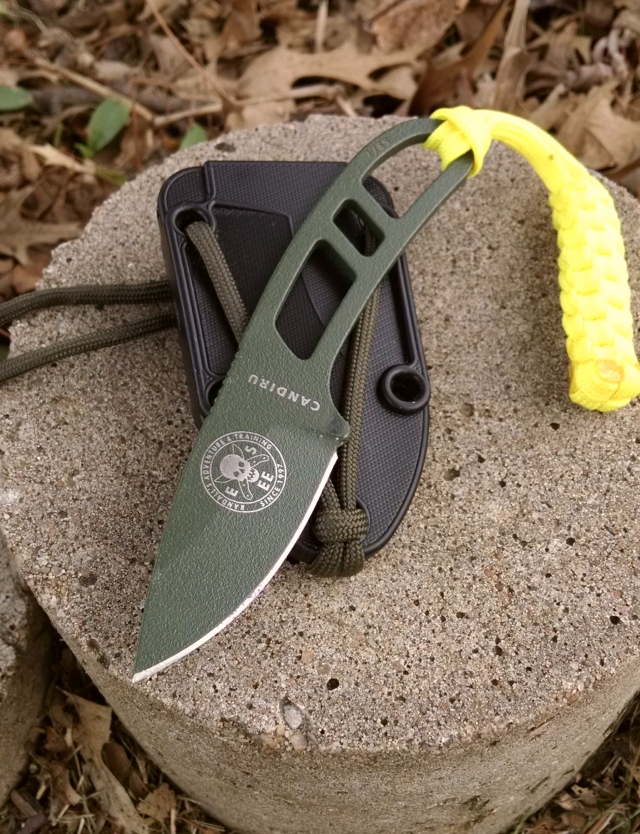 The Esee Candiru is a small fixed blade that is suitable for edc. There are a lot of small fixed blades to choose from but most seem to have the same issues. They are either so small or so poorly designed that they turn out to be very uncomfortable to use and spend most of the time tucked away in a drawer.

On the other end are those knives that could be called medium sized, the maker then dispenses with the handles and calls them a small knife.

The Candiru was designed small and meant to be used. The specs below are from the Esee website. 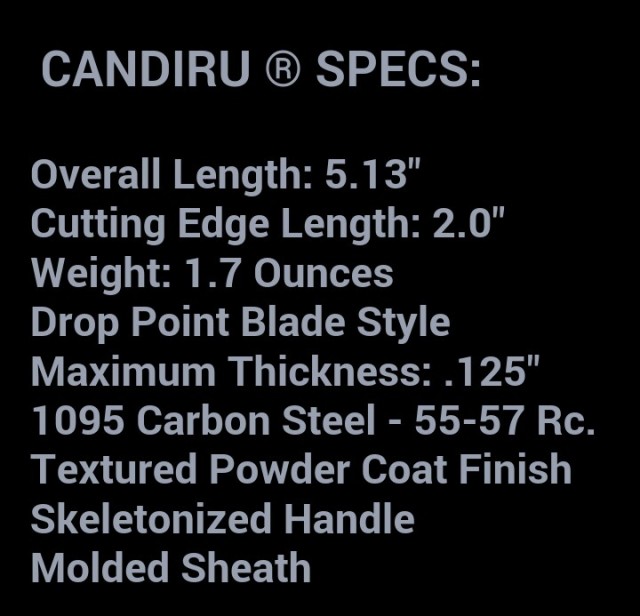 The blade is coated and should do a fine job protecting the 1095 from rust, the edge is exposed and a little maintenance is needed. The coating is well done and available in several colors – note the photo from their site.

The sheath is polymer and holds the knife securely. When I first got it, it was almost too secure, getting the knife out was quite a struggle, it gets better over time and is just right now.

Neck carry is one option. I prefer belt carry. The photos below show paracord (included) and is what I use. I wear it between my belt and waistband of my jeans. 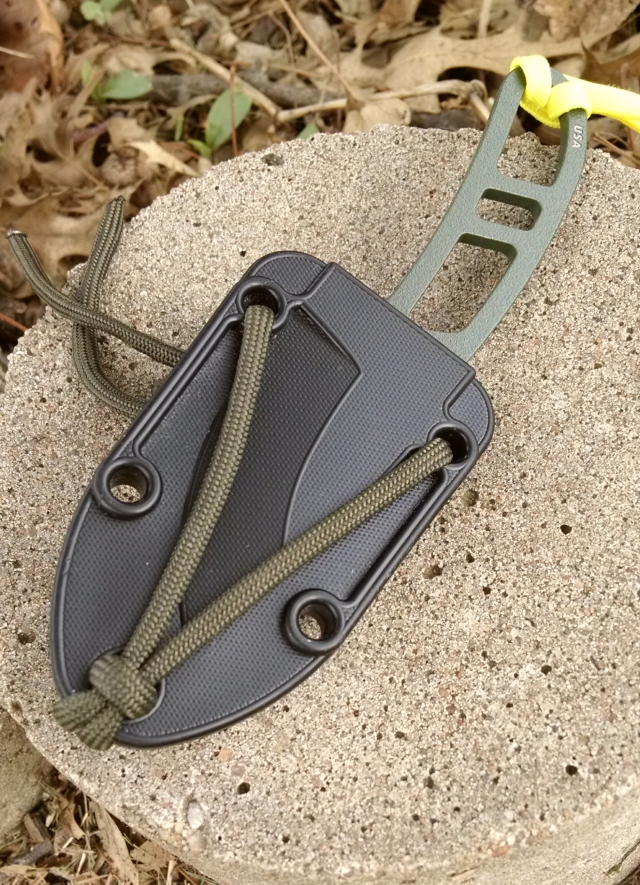 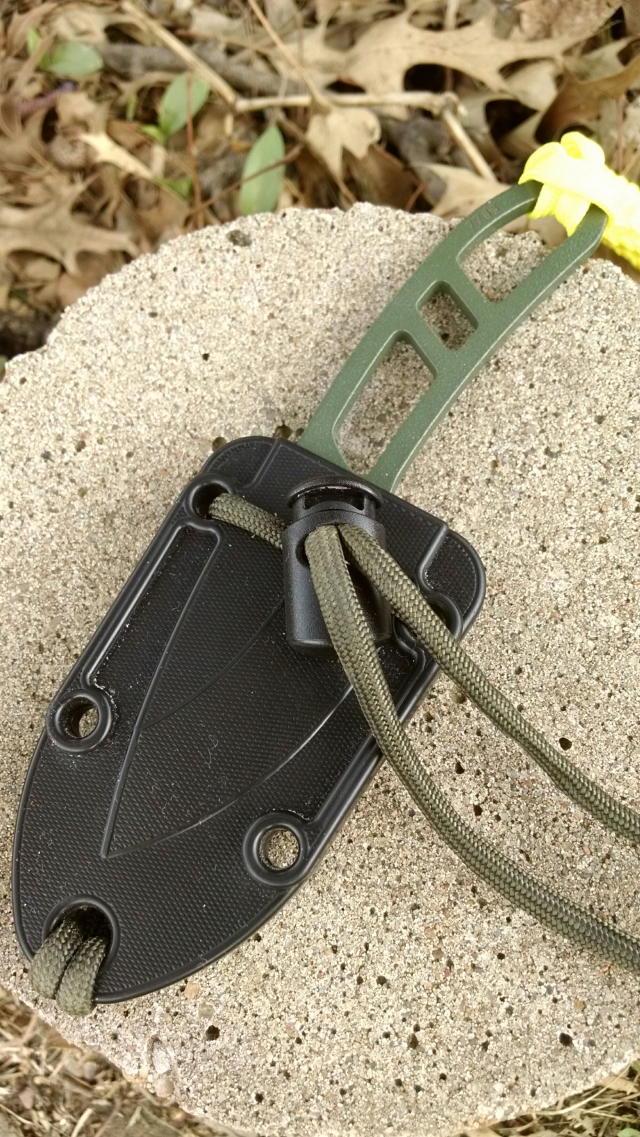 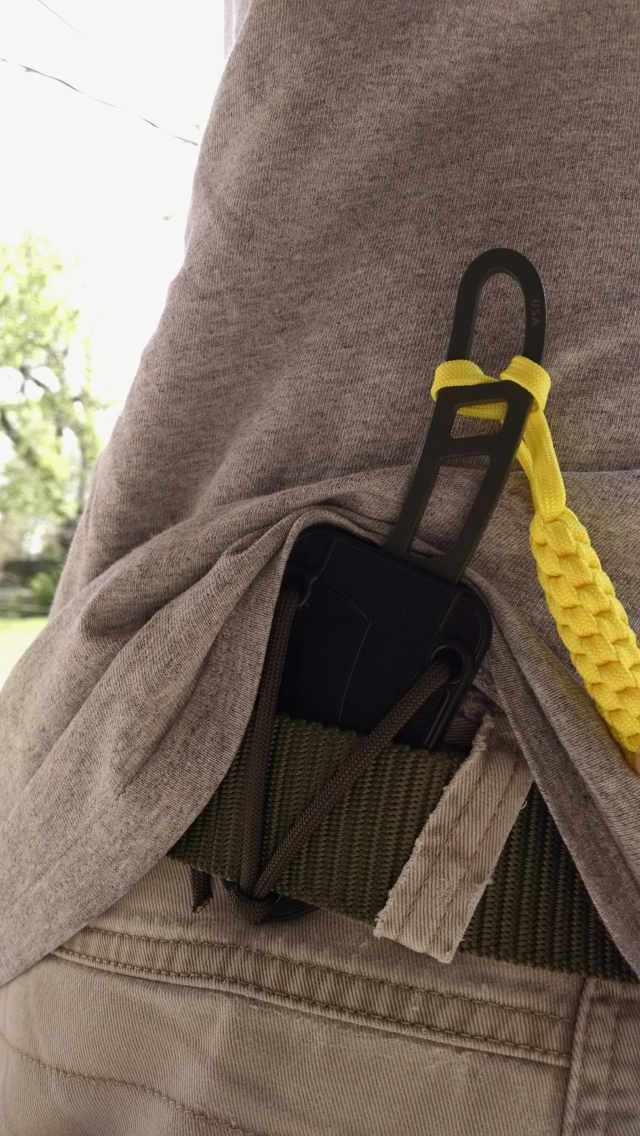 As you can see, it is a 3 finger grip. As small as it is, it still seems to be a better design than most knives in its class. There are factory scales available but I want as thin and unobtrusive as possible. 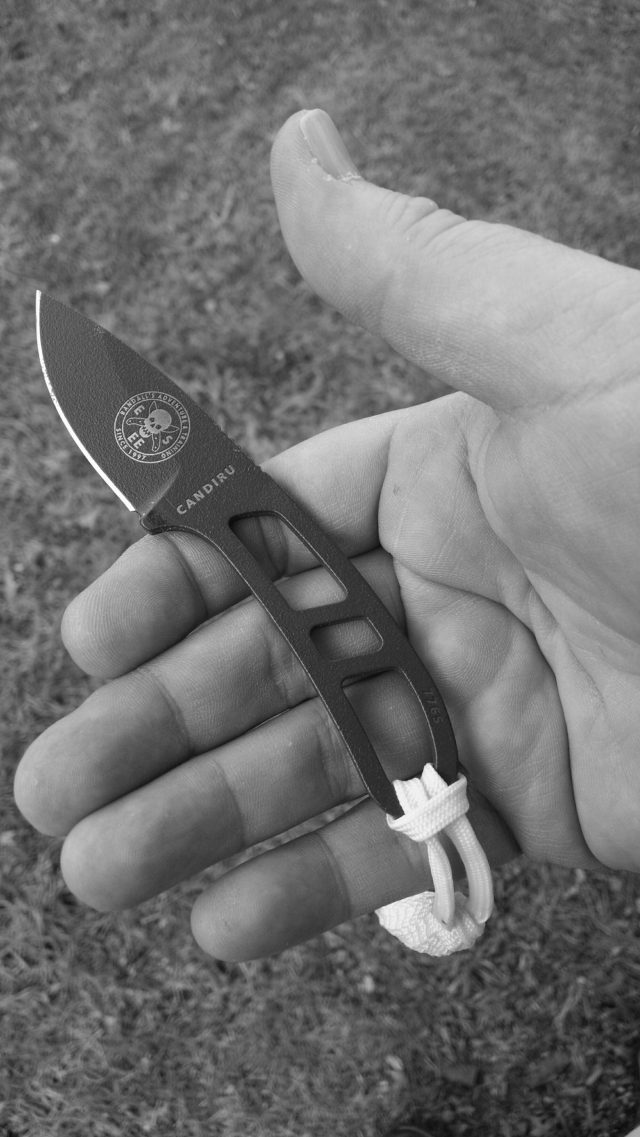 I do have the lanyard/fob, whatever on it. It is helpful for drawing the knife. I also found that the simple act of laying it on the side of the handle improves the grip immensely. It allows extended use that is surprisingly comfortable! 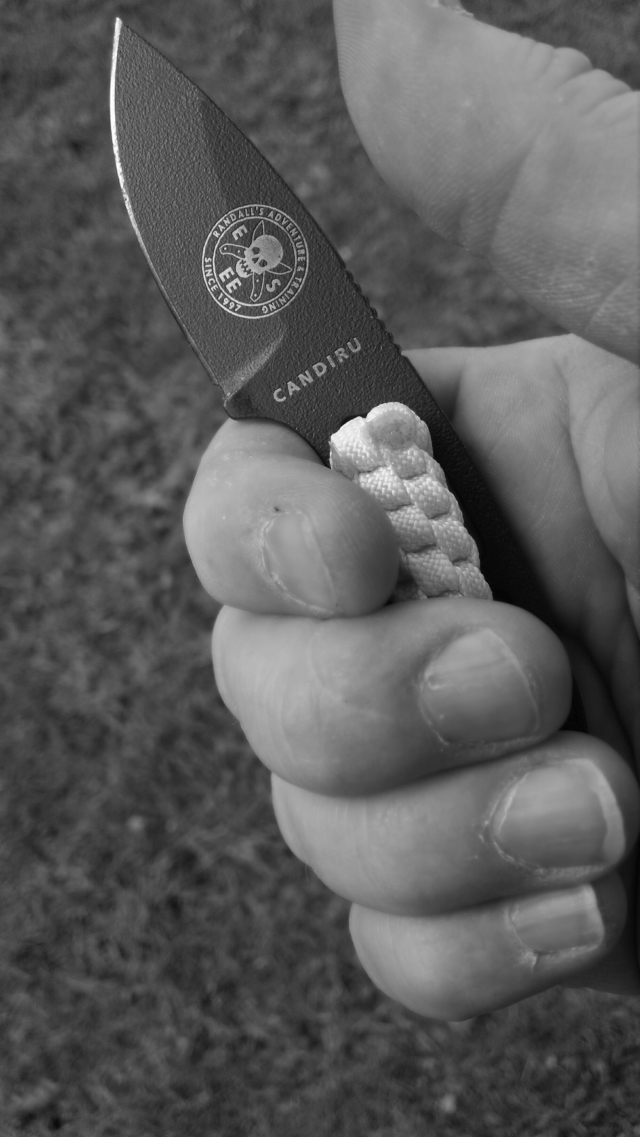 Edge holding is quite good. 1095 is a very good steel and well proven. Quality heat treat and a great edge to start with and you have plenty of edge holding capability to finish whatever job you start.

I have not gotten to use it as much as I would like, I can say that the use I have gotten is enough to tell me the coating will hold up much better than average.

It may seem like an expensive knife for its size and steel, that is until you actually use it and see how it really performs! Excellent! 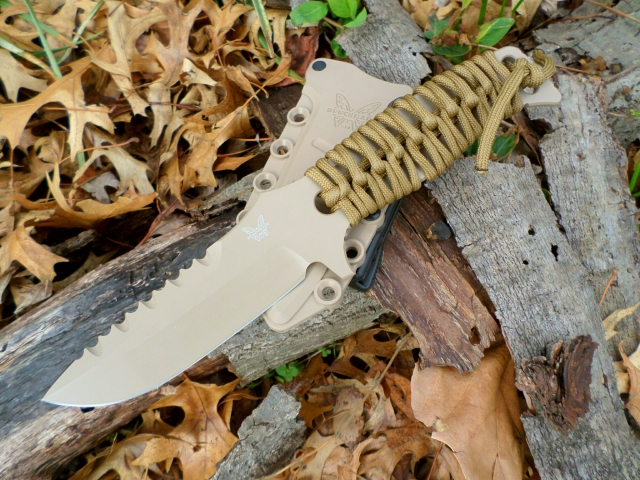 Just got this. It seems every time someone asks “what knife should I get”, Benchmade always makes the list. The Adamas is mentioned frequently. They also make a folding version but I have more than enough folders. I decided on the fixed blade just because it seemed to be the perfect size, big enough to be useful and small enough to carry comfortably.

So, does it live up to the hype?

The blade is 4.2″ and OAL about 9″. It is D2 steel (Heavily used by Dozier Knives) and this model has a desert tan coating). 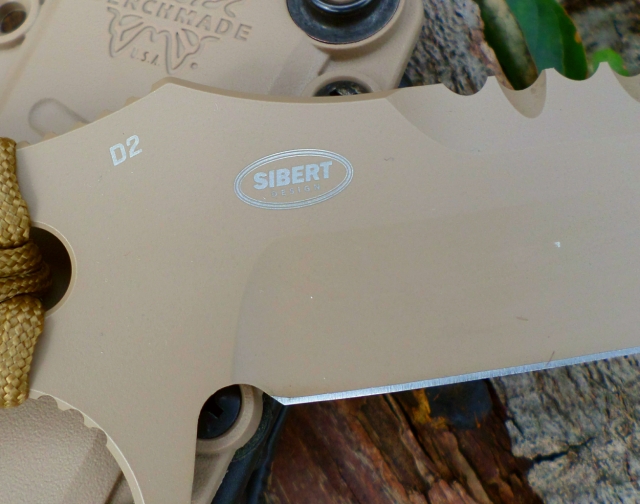 The designer is apparently a guy named Sibert.

It came extremely sharp, shaved hair without dragging or pulling. The top edge in front of the serrated portion of the spine is sharpened.

The grip is skeletonized and serviceable . Skeletonized handles tend to help with a low profile, but rarely comfortable. It comes with paracord to wrap the handle (video instructions on the Benchmade site). When I bought mine, the shop had one on display that they had wrapped so I asked if I could have that one. With the wrap it is quite comfortable and fills the hand well.

The sheath is polymer. 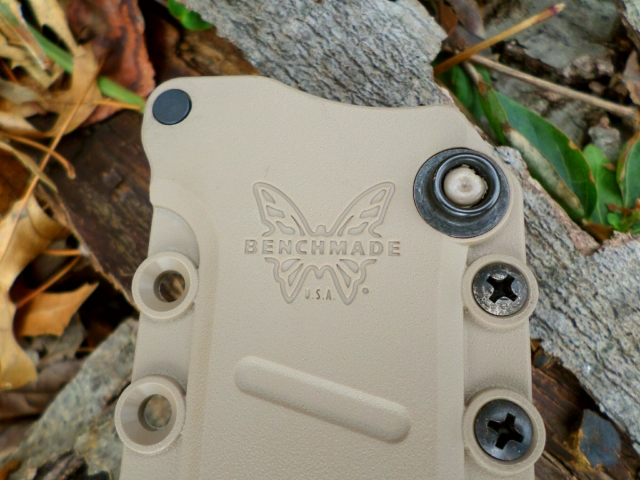 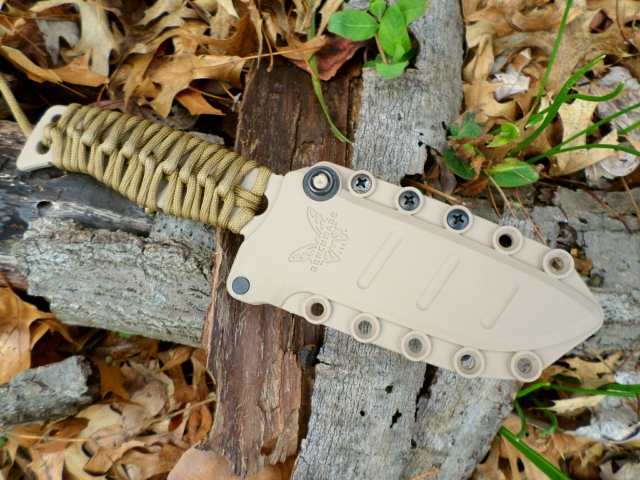 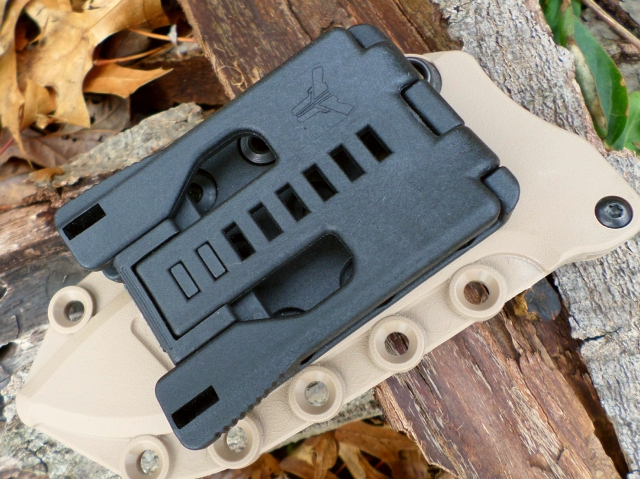 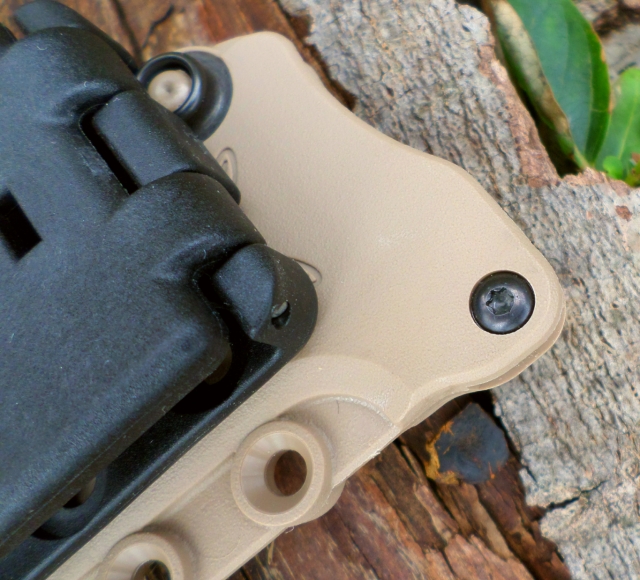 The sheath includes the tek-lok. If you’ll notice the torx screw, you can adjust the retention strength. It also has a retention strap for extra security. It is removable and in my case, I don’t need it. It’s a nice setup and easy to carry. 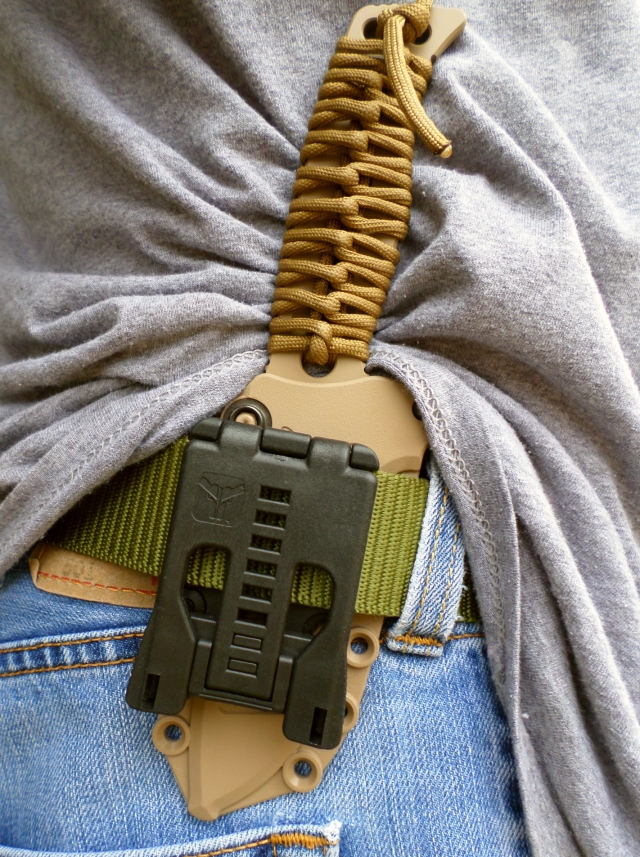 I would like to mention the serrations. They are not very sharp at all, the points are flat. I’m not sure what they’re good for. If nothing else, they add to the looks of the knife, I guess that counts for something. 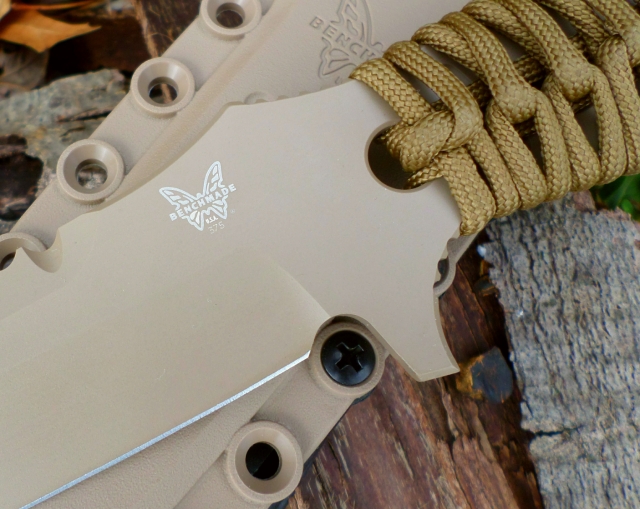 I had intended on using today to really use the knife. Too many other obligations. Was able to get some photos done though before it gets used.

Initial impression. I think with the wrap will make it a pleasure to use and can be replaced if needed.

I suspect the coating will hold up well, seems similar to Esee.

My experience with D2 is with Doziers, I’m hoping Benchmade does it just as well.

I will update this (starting in the next week or so) as I get to use it.

Edit – Not much more about this knife. As nice as it is, it just hasn’t grown on me at all. It has a new home now.